The tomtit (Petroica macrocephala) is a small passerine bird in the Australasian robin family (Petroicidae). Also known as miromiro, or historically the great-headed titmouse, tomtits are endemic to New Zealand. Weighing in at only 11 grams, tomtits are one of the smaller species of New Zealand birds (the lightweight record goes to the rifleman at a mere 6 grams). But what they lack in size they make up for in character. They are common throughout New Zealand and live in shrubby and forested areas, where they typically perch on a branch or tree trunk to watch for flying insects. Once spotted, they will flit out and snatch up the target before resting on the next perching spot. You can often attract a tomtit into photographing range by imitating their call and then stirring up the leaf litter to disturb insects into the air. As kids we used to imitate bird calls by rubbing a piece of polystyrene on a wet glass jar and would be rewarded with tomtits perching on our packs or boots while they scanned the air for insects.

Tomtits have played a special role in one of New Zealand’s conservation success stories, acting as surrogate parents for a number of critically endangered Chatham Island black robin chicks. Black robin numbers dropped to just five individuals in 1980 due to predation by introduced mammals. With only one female (Old Blue) remaining, a dedicated team of conservationists devised a cunning plan to rescue the species by eliciting the help of the humble tomtit. Each year the team would remove the first clutch of eggs from Old Blue’s nest and place them in a tomtit nest. The unsuspecting tomtits raised the chicks and Old Blue would lay a second clutch of eggs. This cross-fostering was so successful that some of the first fostered chicks grew up thinking they were tomtits! Some careful tinkering with the techniques produced robins that thought they were robins and there are now ~250 black robins on two islands in the Chatham Islands.  All thanks to Don Merton and his team of dedicated conservationists and tomtits! 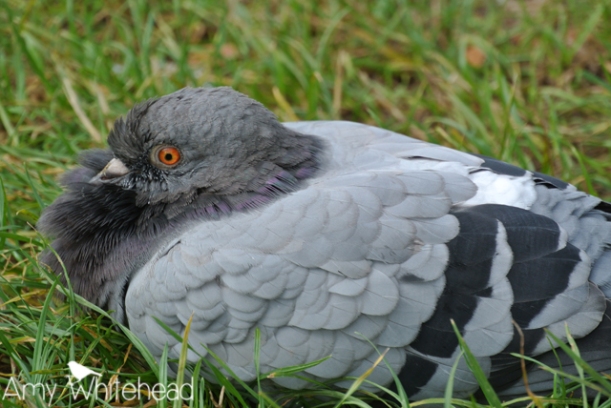 So it’s been quite a while since my last “weekly” Wildlife Wednesday post.  I’m blaming it on the excessive amount of travelling I’ve been doing (16 flights in 2.5 months!) but really it’s mostly laziness (with a dash of busy-ness and general craziness).  But on my travels about the place, I’ve been taking pictures of some of the things I’ve been seeing along the way. One thing that struck me was how often I was seeing the same species over and over again in completely different parts of the world.  Some of them have been moved around by people, some have made the journey by themselves.

Feral pigeons (Columba livia) are one of those cosmopolitan species that seem to be in every city you visit.  Descended from domesticated rock doves, pigeons have become well established in cities where the ledges of buildings and bridges make great substitutes for their natural roosting habitat on cliffs.  Pigeons generally get a pretty bad wrap, with “avian rats” and charming monikers used to describe them. And to be fair, some pigeons are pretty nasty looking – lice-infested, missing toes and feathers or some weird motley hybrid. But they can also be quite pretty birds, with a beautiful iridescent green sheen around the back of the neck.

In some parts of the world, feral pigeons are doing their bit for threatened species conservation by offering themselves up as prey (although probably not knowingly or willingly).  Peregrine falcons are making a comeback in some urban centres, where tall buildings provide cliff-like nesting habitat and flocks of feral pigeons provide dinner.  It was pretty cool to be able to watch a pair of peregrine falcons going about their business next to the London Eye thanks to the RSPB (& someone dressed as a hedgehog!).  Urban ecology at its best. 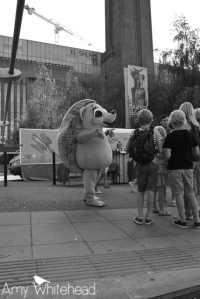 A few years ago I did some contract work surveying nesting populations of river birds on the Waimakariri River in New Zealand.  We walked along the river bank identifying and counting birds as part of an annual census to look at populations trends over time.  We also spent a lot of time leaping in and out of a moving jetboat onto tiny patches of gravel in the middle of the river.  That led to some heart-stopping moments!

One of the more abundant species we saw was the black-fronted tern (Sterna albostriatus).  These guys nest in colonies and tend to mob anyone or anything that gets too close, including well-meaning scientists!  Which makes the counting process somewhat difficult – “Have I already counted the one wheeling around the top of my head or is that a different one?”! Black-fronted terns only breed in the eastern regions of  New Zealand’s South Island and are usually found nesting along braided rivers.  Nests are very basic, with the eggs laid among the river gravels.  Black-fronted terns feed on freshwater fish, invertebrates and worms.  Unfortunately their numbers seem to be declining, mostly likely due to predation by introduced mammals and loss of habitat.

These whio (pronounced “fee-0”) ducklings were just a few days old when I took this photo.  They were some of the lucky ones, hatching in a river valley where introduced predators were kept at low numbers due to the hard work of Department of Conservation staff (who seem to be as threatened as the species they protect).  All of eggs and ducklings just over the hill where there was no predator control got munched by hungry stoats!

I know I’ve featured whio before on Wildlife Wednesday (the inaugural post in fact) but I have a special place in my heart for these bluest of blue ducks (and a lot of photos), having spent 5 years of my life working with them.  March is Whio Awareness Month and I had great intentions of writing an enthralling post about the plight of the whio and the work that’s bring done to protect them. But it’s the end of March already and I have a week full of meetings and deadlines, so it will have to wait for another day. But luckily the good folk at the Department of Conservation and Whio Forever have been busy telling their stories.  Head over to the Whio Forever website to learn more about project – a partnership between the Department of Conservation and Genesis Energy.

I should also note that this is my first post to be posted to the Research Blogging blogroll.  I wonder if this will help to make whio more popular than my most popular post so far about kakapo? 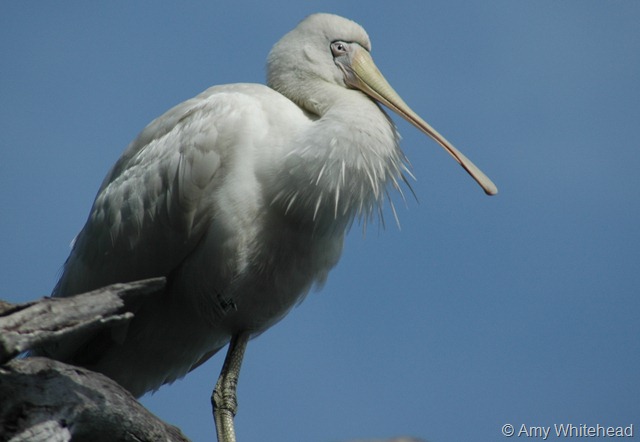 This handsome chap is a yellow-billed spoonbill (Platalea flavipes) hanging at the top of a dead tree in Yanchep National Park just north of Perth.  I spotted it from about 100m away and, despite my best sneaking efforts, only managed to shoot a few frames before it flew majestically off into the distance.

Yellow-billed spoonbills, like their royal spoonbill cousins, live close to waterways.  They walk slowly through the water to disturb small animals in the mud, sensing the vibrations of their prey with the edges of the “spoon”.  They use this weird-shaped bill like forceps to snap up tasty treats, including yabbies, shrimp, insect larvae and small fish.  Yellow-billed spoonbills are found across most of mainland Australia and occasionally in New Zealand, Lord Howe Island and Norfolk Island.

The observant among you will have noticed that last Wednesday passed by without any wildlife, at least on this blog.  I was back in NZ to celebrate my sister’s wedding and dodgy internet coverage meant blog posts weren’t going to happen.  My conservationist sister and her takahē relationship manager husband met over a bowl of meal worms while handraising takahē (Porphyrio hochstetteri) with puppets.  I also played Mum to takahē chicks back in the dark dim past but unfortunately before the advent of digital cameras.  So  instead I thought I’d share a photo of another threatened NZ bird that our conservation-orientated family have worked with, the kakapo (Strigops habroptila).

END_OF_DOCUMENT_TOKEN_TO_BE_REPLACED 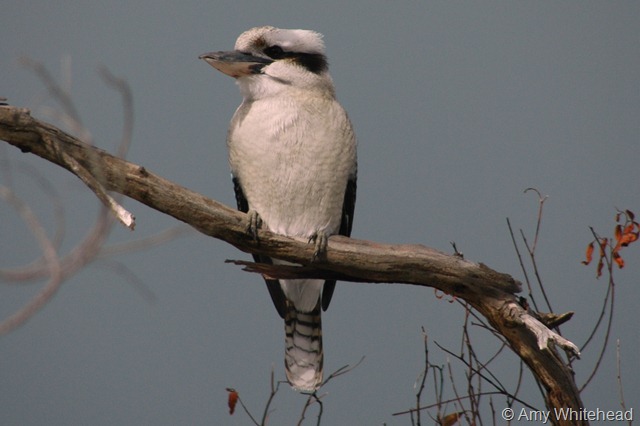 Given that I’m back in Melbourne, and this week we celebrate Australia Day, I thought it only fair that I post a picture of something Australian.  Now, being a kiwi who has only recently crossed the ditch, I should confess that I know very little about Australian wildlife (except for the damage that brushtail possums do in NZ).  In fact, most of what I know about the kookaburra comes from the children’s nursery rhyme!

Kookaburra are well-known for their (slightly creepy) laugh-like call , which is used to establish territory boundaries.  They are carnivorous and will perch on branches waiting to launch themselves onto unsuspecting prey, such as lizards, large insects and small mammals.  This handsome fellow was hanging out along the Great Ocean Road outside a cafe, where it made a living swooping down on the lunch of unsuspecting tourists!

and welcome to my research blog. I'm a conservation biologist trying to save the world one line of code at a time. Join me as I get excited about ecological research, muse over lines of R code and explore our natural world through photography. Find out more about my research interests and publications or contact me by email.